Home › Style › Dashi, the clear broth that may not be your friend!
#

Dashi, the clear broth that may not be your friend! 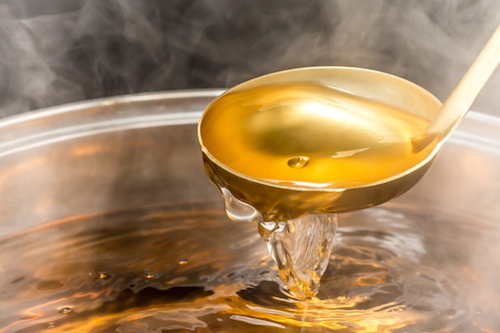 Japanese food can play a mean game of deception when it come to what are ostensibly vegetarian and vegan dishes. From tofu to soup, and lots of vegetable dishes in between, what appears to be a completely veg-friendly presentation is, quite often, neither vegan nor vegetarian. The culprit: Katsuo-bushi Dashi, or said in a more anglo-friendly way, “fish stock.” Filets of bonito are dried for preservation, then finely grated into flakes. These flakes are then later simmered in water, thus creating the fish broth into which noodles may be served, fried tofu may be accompanied by, or vegetables simmered in. Therefore you should assume nothing when it comes any otherwise vegetarian or vegan dish if it is in (or was simmered in) some sort of broth. “Katsuo-bushi” is an ingredient name you will definitely want to remember in Japanese!

Before you lapse into despair, here’s some good news: Not all “dashi,” or soup stock, is made from fish! Dried (then later reconstituted) seaweed also makes for a mean broth, and a vegan-friendly one at that! The name of this broth is “Konbu Dashi,” and strictly speaking it should have no fish in it — but you’ll probably want to double check on that just in case.

It can’t be stressed enough that many apparently meat-free Japanese foods are not vegetarian or vegan, at least not as generally prepared. This means soba and udon, agedashi (fried) tofu, ramen, miso soup, and even the sauce you might dip your vegetable tempura into. Also be sure not to forget that many Japanese don’t think of fish as “meat,” so you’ll want to specifically ask if there is any fish product in the food on offer. Try to find that Konbu Dashi, or try to stick to foods that would be hard pressed to hide non-veg ingredients, like edamame (steamed soy beans) for instance.

Previous
You’ll Always Find Something at the Izakaya
Next
Useful Japanese words for vegetarians
Guest user.
Log in・Sign up