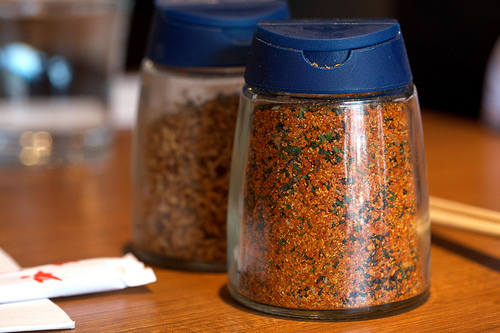 If you’ve dined about in Japan, you are bound to have seen the iconic red capped, large vial shaped bottle of “shichimi” on the table. It is, as it looks, spicy, but not one dimensionally so. Shichimi has been popular since the Edo era (1603-1868), originating in Tokyo (then called Edo), where it was produced by herb dealers. It’s now popular all over the country, and deservedly so, as this magical mix of seven spices adds both spice and depth to just about any food that could use a little kick!

“Shichimi” means “seven flavors” (or spices), making it a very straightforwardly named spice. The colluding cohorts of spice are: Red chili pepper, ground Japanese black pepper, roasted orange peel, white sesame seed, black sesame seed, hemp seed (see, hemp really does have uses besides that one!), ground ginger, and flaked “nori,” which is a dried and seasoned seaweed. Some variations may be available from bespoke spice vendors, but the store-bought varieties stick closely to this formula.

There are no penalties for dashing shichimi on to whatever food you want. Anything fried is going to be a good mate for shichimi, as are stir fried dishes, udon, soba, and so much more. Basically, anything that’s already spiced but could use a bit more is a candidate.

For those just wishing to have pure spice, there is “ichimi,” which just means “one spice.” That one spice is red pepper. But it is the combination of seven flavors that makes for a fantastic addition to cooked foods across Japan, and maybe some Western foods as well. Give it a try and you might be surprised just how excellent an all-purpose spice it is!

Previous
Nori: Have your seaweed dried, spiced, then sliced or diced
Next
What exactly is this “ponzu” thing?
Guest user.
Log in・Sign up