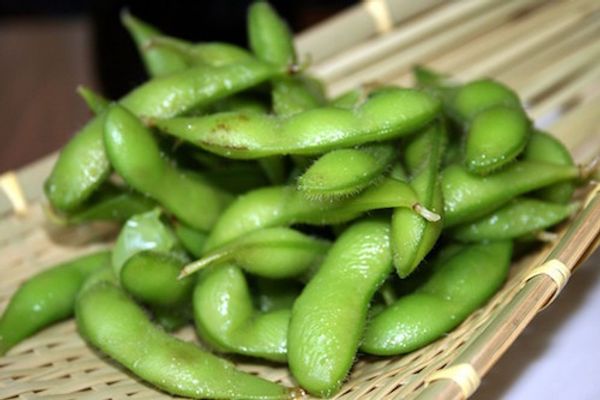 Edamame, over the course of a few short years, has become synonymous with Japanese food. Naturally, Japan hasn’t cornered the market on soy beans, but starting a meal with some edamame (and perhaps a beer?) has become deliciously commonplace. What’s the story behind this healthy and fun to eat snack?

It is thought that edamame consumption in Japan dates back to the 13th century or earlier. The soybean pods make for a highly portable source of protein, an appeal spanning the centuries, and naturally so. The beans can be steamed or boiled, the latter sometimes being in salty water and sometimes in plain water. Once they are cooked just tender, they can be eaten warm (or at room temperature, but preferably not refrigerator cold) by deftly popping them from the husk right into your mouth. A little bit of salt — but rarely anything else — sprinkled on top makes them even tastier, and also increases the temptation to pair with a beer.

The name “edamame” literally means branch bean, and aptly so, since edamame are usually handpicked off thin branches. The fresh variety often are sold still attached to some branch, with a few pods interconnected and a stray, inedible leaf or two still intact. Notably different from most green beans, the edamame husk is a little on the furry side, almost as if some peach fuzz were growing!

Simple may be best, but for those interested in more than a steam-and-salt, there’s still room from some playful and creative uses of edamame out there. Hawaii’s exceptionally heterogeneous culture has been strongly influenced by Japan, and one dish that reflects this is husked edamame stir fried with Vietnamese chili sauce, soy sauce, garlic, and ginger. More traditionally Japanese in its nature, husked soybeans with sesame seed, white miso, and a bit of sugar and salt makes for another addictive edamame treat.

Previous
Umeboshi: Have You Had Your Pickled Plum Today?
Next
Nori: Have your seaweed dried, spiced, then sliced or diced
Guest user.
Log in・Sign up